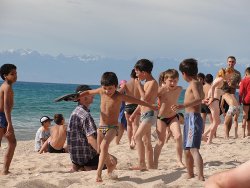 At the beginning of the year, we were joined by Br. Vladymir Paszkov, a Russian Jesuit. Vladymir had studied in Egypt and Germany and apart from his native Russian, speaks: English, German, French, Arabic, Turkish and Italian. In these, he coaches students from Jalalabad’s various higher education colleges and also visits the disabled children’s home. Until the summer we also had with us a Scottish volunteer, Martin McKinney. He led an English language project at the Kyrgyzstan International University and in the parish. Martin also taught English in the local prison, as well as being very active in helping disabled children from one orphanage plus visiting another nearby orphanage.

The parish has gained a new member – seven year old Feruza – who was baptized on Easter Saturday. She happens to be the great granddaughter of our very first parishoner, Maria Jozifovny who died two years ago.

To alleviate the fresh water supply problems we have put in a 2 cubic metre cistern. Furthermore, the house is now connected to the town’s sewerage system, which does away with the difficulties and expense of emptying the septic tank. In addition a new – gas or electricity fired – steam heating system has been installed in the chapel and catechist room, and the former now has a small tower and its main entrance a new porch.

1st September saw a ceremonial unveiling of a memorial commemorating the stay – during World War II – in Jalalabad, of 5th (Polish) Infantry Division of General Anders.

The spring brought two Austrian therapists – Ursula Dietz and Heidi Praxmarer. Jointly with The association of parents of handicapped children, “Meerim Bulak”, they conducted a two week course in Bobaath therapy and hippotherapy for treating handicapped children, particularly those with brain damage. Twenty-five parents, doctors and therapists, split into two groups, attended the course. One group was housed in our catechist room, with Br. Vladymir as translator. Ursula and Heidi were accommodated in guest rooms in the apartment bought last year, in a nearby barrack block, whilst lunch for the course’s participants was served in our summer kitchen.

We continue to visit and assist the Jalalabad handicapped children’s home, for some 120 children, and this year we managed to refurbish two of its toilets. Each week we deliver fruit and sweets to this home, show cartoon films, or organize other activities. Br. Damian provides similar support, for the inmates of the local prison and has a classes for drug addictives. Fortnightly, we visit the Kizylkiya home for the disabled, housing 250 persons. “Adoption of heart” organized jointly with the Warsaw Province Jesuit Mission Office, supports six orphans, each of whom receives 10 pounds at month. One of these, a girl – plus her mother and sister – were banished from home, by the father, when he learnt that his wife had become a Christian. In September, Hannelora Paither, from Bavaria, paid us another visit, during which she again distributed money to: old people living alone, the disabled and families with many children. On this occasion, this amounted to 4,500€.

During the summer, in the village of Ak-terek at Issyk-Kul lake shore, we ran three 10 day camps for a total of some 160 children and young people. Activities included: daily masses, prayers, learning various songs, sports, English language lessons plus several days of trekking and camping in the mountains. In addition, there were various competitions, discotheques and camp fires. Where practicable, the campers helped out in the kitchen and 20 volunteers, including some Jesuits, from Poland, Germany, Slovenia, Scotland, Ukraine and Russia assisted in running the camps. Of great help, were some Franciscan nuns from Slovakia and Fr. Jerzy Jedrzejewski who worked, every day, in Bishkek. The young people’s camp was attended by a group from Uzbekistan, led by Fr. Piotr Kawa, a Franciscan. Subjects for discussion, for the children, included the parables, and, for the young people, “The Sense and Purpose of My Life”.

In addition to those above, Fr. Krzysztof ran a week camp, beside Lake Toktogul, for several parishioners from Osh and Jalalabad. Such camps are of great value to us. Throughout the year, priests can visit their scattered and small parishes – sometimes of just several people – only once a fortnight and occasionally even less frequently. Consequently, it is difficult for them to perform their pastoral duties as fully as they would like. The camps are an opportunity to catch up.

This year we also ran at that same place two camps for students, predominantly Muslims. The aim was for the Christians and Muslims to get to know each other better and to give English lessons. In the evenings, around the camp fires, much of the talk was about: life in general, culture and customs in Europe and Kirgizstan. Sometimes, Christianity and Islam were discussed late into the night and, occasionally, we prayed together. These camps proved very popular by Muslim students.

This summer, under the direction of Br. Damian, work started on building a retreat and rest centre, in Chychcan, on the shores of Lake Issyk-Kul. There, in the future, we will run summer camps for children and young people, as well as rehabilitation sessions for disabled/orphaned children, retreats and other gatherings for various religious groups. The foundations were blessed, in August, by Bishop Nikolai Messmer. Now, the fitting out stage is beginning and some of the work is being done by volunteers from Poland.