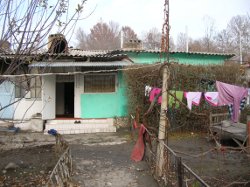 THE CHAPEL IN OSH

First of all, at the beginning of the year we managed to buy a house in Osh, the second biggest city in Kyrgystan, where we have been organizing holy mass at a private flat, every second week for the past two years. The house was bought with the financial support of Jesuits’ Curia in Rome, the American Episcopate and the Vatican. After a minimal renovation (toilet and electricity), a small catholic community (mainly of German and Polish origin), participate in holy mass each Sunday. Now that Father Krzysztof Korolczuk has a place to stay in Osh, he has started visiting the Disabled peoples’ House situated in Kyzyl-Kiji ( about 100 kilometers to the South). This institution houses more than 200, to whom Father Krzysztof distributes food, clothes and shows movies in addition to helping with renovation (for example the water well’s renovation.)

In the season of spring and autumn we organized football competitions for girls and boys. A dozen teams consisting of Muslim youngsters (Kyrgyz and Uzbeks) took part. The competition which took place in autumn involved 18 teams.

SUMMER: CAMPS FOR CHILDREN AND YOUNGSTERS

During the summer we organized a few camps for children and youngsters. The camp for children, in which 50 young catholic from all Kyrgyzstan took part lasted 10 days and took place in Ak- Terek near lake Issyk-kul. Daily prayers, holy mass and catechesis were vital. Children also took part in a trip to the waterfall in Barskaun Valley.

The camp for youngsters was situated in the same place. This time among the participants were also young people from Usbekistan: Tashkent and Fergana. They arrived together with their Franciscan priests. Five students from a Jesuit Church in Piotrków (Poland) together with Father Remigiusz Kalski SJ were involved in the camp’s organization. During the camp’s we organized trips to nearby valleys: Czon Kyzyl Suu, Barskaun, Saruu. The catechesis’ subjects were: Love- Matrimony- Sex- Family.

Camps lasting 2 days were also organized for the youngest children in Biszkek (aged 5-8 years) in which 30 children took part. Children slept in a centre governed by Franciscan sisters,

Such camps are very important for us, because during the whole year, parishes (sometimes numbering no more than a few people) are visited by a priest only once every two weeks, or sometimes less. Often the priest has no time to organize catechesis for children. During the camps he has the opportunity to spend time with the children

Another week long camp was organized by Fr. Krzysztof for Parish member form Osh and Dzalalabad at Toktogul lake.

CAMP FOR STUDENTS FROM KYRGYSTAN

Our parish organized a tent camp for Islamic students , situated near lake Sary- chelek in the Tien–shan mountains. 25 students lived in tents and prepared food on camp fires. Polish students took part In the camp , allowing young people from different countries to share their experiences of life and to get to know each others culture, history and religion . Kyrgyz students studied English language and everyone took part in different competitions and excursions to the mountains.

In autumn we were visited by Doctors Thomas and Gertraud Weggemann from Austria, who specialize in children’s disabilities. This was their second visit organized by a Jesuit from Austria, Father Herwig Buechele. During their 2 weeks stay the doctors examined about 60 children with different disability levels, though mainly suffering from infantile cerebral palsy. During this visit, a Society of disabled children’ s Parents: ‘ The Source of Mercy’ was founded and it now works in cooperation with our parish. Some time ago, with the financial support of sponsors found by father Herwig , we built a water tower, which delivers a regular water supply to a nearby disabled childrens home which houses over 100 children, some of whom are paralyzed..

Among different charity actions, we need to mention ‘the adoption of heart’ organized in cooperation with Warsaw Catholic Mission Office of the Jesuit Province, governed by father Aleksander Jacyniak SJ. Each month 8 orphans get financial support at the rate of 10 $. This year our parish spent almost 10. 000 $ on various charity actions such as: houses for disabled people, houses for pensioners, prisons and individual financial support. During Christmas our Santa Claus went to Houses for Disabled People and also Pensioners , where he presented several hundred gifts.

CONSTRUCTION INVESTMENTS AND NEW MEMBERS OF OUR COMMUNITY

In autumn we managed to buy a flat situated in the building next to our house. After renovation ,there are now 2 rooms, a small corridor where we have a computer, and a bathroom. It is now home to brother Vladymir Paszkow – a Russian Jesuit who has studied in both Egypt and Germany. Brother Vladymir knows several languages including Arabic and specializes in the field of Islam. In the second room lives Martin McKinney ,a volunteer from Scotland who teaches English in our parish and also at two local universities.