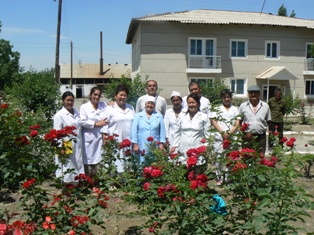 For a few years now every two weeks/month someone from the parish visits the Neurological Dormitory in Kyyzyl-Kyya, which is about 200 km from Jalal-abad. Fr. Remigiusz decided to take us with him as well. I must admit I was a little afraid of this visit. I have never been to a similar institution, and since it was in Kyrgyzstan I was expecting the conditions to be quite dramatic. However I was very wrong.

On Monday morning we’ve arrived to a big area full of trees and flowers. On the premises of the facility there is a garden and an orchard that takes up few acres. We stopped in the courtyard of the building where residents live (there are 230 people living in the facility). Many of them came running to the car, shouting something and waiting impatiently until we leave the car. Together with Marysia we were a little overwhelmed by such a warm welcome and we found it difficult to find ourselves among the crowd of people who were hugging us. From the common shouting you could distinguish people’s questions about br. Damian, f. Krzysztof and loud choir of people demanding taking photos of them.

Once we’ve all cooled down, I mean mainly me and Marysia, we took out the gifts from the car and prepared to do our “rounds”. Gifts might be a big word; in the boot of our car we had few boxes with soap, ice-cream, chocolate bars and a few watermelons. Soap is an item that is always needed in that kind of facilities, the rest is just a little treat, a symbol that someone still remembers of these people. Not many of them have people coming to visit and the fact that once in a while someone comes to visit, wants to give them a little present and ask how they are feeling means the world to them.

The building was clean, walls and floors looked new. The beds where put in large rooms (about 15 in each), nonetheless they were also in perfect order, beds were made and because it was a sunny day the windows were open. I was amazed how different the place is from what I have expected it to be. Quickly I understood why Kyyzyl-Kyya looks the way it looks. Obviously it’s not a standard for that kind of a facility in Kyrgyzstan, the situation has changed a lot when the financial aid through the parish started coming.

About five years ago Br. Damian and Fr. Krzysztof started the charitable activities in The Home for Disabled Children in Jalal-abad. When the kids grew up, they were being transferred to the facility in Kyyzyl-Kyya. Br. Damian and f. Krzysztof got interested in the Dormitory and that’s how the cooperation started. Since then a lot of things in Kyyzyl-Kyya changed for better. The parish organized movies, was coming to visit residents and helped financially.

Not long ago, thanks to the Catholic Charity Organisations, the Neurological Dormitory in Kyyzyl-Kyya received a Volkswagen Transporter for their use. The facility has also been covered by one of the Polish Aid projects (Polska Pomoc), and managed to finance the repair of a well and the purchase of a water pump.

Recently the renovation of the roof an steam bath was finished, it cost over 8,5 thousand dollars, a part of the money came from private donors e.g. the Polish journalists in Warsaw. Of course there is still a lot that needs to be done, among other things, there are plans of renovating the laundry room and the roof above it but nonetheless the overall conditions are satisfying for Kyrgyzstan.

During our visit we handed out the gifts and we had a chance to talk to most of the residents and staff. Everyone was very friendly and grateful for gifts and few minutes we spend with each of them. I must admit that it was really nice to visit a place where so much has changed due to support of people of good will. In this institution forgotten even by the families of residents, decent conditions were created for those who really deserve to live just as the rest of us. Although it might seem that a facility like this will be gray and sad, there is a positive energy here, hope for better and joy of life.