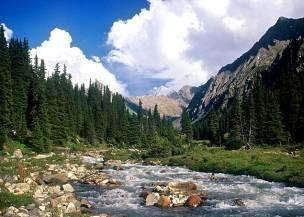 Kyrgyzstan is one of the five mid-Asian former Soviet republics that appeared on the world map suddenly as independent countries in 1991, but remains relatively unknown to most of us. Kyrgyzstan borders Kazakhstan, China, Tajikistan and Uzbekistan. Size-wise Kyrgyzstan equals approximately 2/3 of New Mexico, with 90% of its surface being covered with mountains reaching over 20 000 feet. The Population approaches 5 million, with a mix of Kyrgyz, Uzbeks, Russians, Uygurs, Dungans, Germans, Ukrainians, Kurds, Tadjiks, Turks and Poles – a total of around 100 nationalities. Muslims dominate the religious landscape, but they are not radicals and the connection most of them have to the Muslim faith is loose. Christianity arrived to Kyrgyzstan in the early Middle Ages. Most recently, Catholics arrived at the end of the 19th century – these were Polish and German settlers. In the thirties and forties of the last century tens of thousands of Catholics were deported to Kyrgyzstan by Soviet leader Joseph Stalin. The first legal parish was established in the sixties. At the end of the eighties Jesuits took over the care of Catholics in this country. Right now there are 12 missionaries and nuns in Kyrgyzstan.

Other than the Bishkek parish, missionaries are visiting about 30 Catholic gatherings that are spread around the country, each between a few and few tens of souls strong. Parishioners are mostly Polish, but also Russian, German, Korean and native Kyrgyz. Most of them are elderly and very poor, but there are also quite a lot of young people and kids. In 2006 Pope Benedict XVI established in Kyrgyzstan Apostolic Administration with Bishop Nikolaus Messmer.

Most citizens have no work and often they only eat what they can plant themselves in their gardens. Retirees are given approximately 10 $ per month, and 1$ will buy 5 small loafs. Field workers, who spend 10 hours working hard in high heat, are paid 2$ per day. This pay is seen as decent. Lots of children are either homeless or working instead of attending schools. There are no medical services outside cities, and in the cities all the healthcare has to be paid in full by the patient – there is practically no insurance system. Major problems besides poverty are abuse of alcohol and destruction of the family structure – both a legacy of 70 years of communism.

It therefore seems clear that charity is the major obligation of the Catholic Church in Kyrgyzstan. Material help coming from abroad, is distributed by us, missionaries, primarily among the sick, invalids, large families and lonely elderly people.

In particular we care for the houses of invalids. Each time we visit such a house, we try to bring bread, an apple or a tomato. We have collaborated closely with “Association of Parents of handicapped children” in Bishkek and Dzalalabad.

Every year we organize a few summer camps: for small children, for older kids, for youth (including students) and for Muslim students. Such camps are very important for us, because they give us a great chance to do pastoral work with children. Most of the children during the year are living in villages, which are visited by a priest once every two weeks. There are few children in our community and it makes it especially difficult for the youth: they have no believing friends. At recent camps there were religion classes on different themes twice a day organized by a Sister . Everyone went for trips to the mountains, took part in different sports competitions and everyday attended Holy Mass and community prayer. There were cinema screenings in the evenings , discos or camp-fires. A few of our youth also helped us as leaders.

We are making a plan for the future to organize a few different camps for our children and youth. The best place for such an activity is Issyk-Kul: one of the most famous recreation areas in the former Soviet union with warm and clean water and surrounding mountains. The main trouble is that every year the prices we should pay for accommodation are higher and higher, a trend that is expected to continue. A Teacher’s monthly salary is about 40-50$, and one day in a hotel at Issyk-Kul lake is 15-20$. It is very difficult to find a cheap house for holidays. At the same time the prices for real estate are rising, a trend that is expected to continue. This current time is the very “last moment” to buy real estate relatively cheaply. We have a plan to build a little house (for 30 people) on the beach of Issyk-kul sea. In the future such a holiday place can be used not only by Catholics from Kyrgyzstan, but also by our parishes in Kazakhstan and Uzbekistan.( For the past few years some parishes in south Kazakhstan and Uzbekistan have been organizing summer camps at Issyk-Kul sea, paying a lot of money for hostels). At the same time this house will be used by such organizations as:
“Association of Parents of handicapped children” in Bishkek and Dzalalabad
“Putnik – center for homeless kids”
“Charity center of Our Lady”
“Polish association” Bishkek.

All these organizations are supporting our project and want in the future to use this Rehabilitation Center.

This center will be used to organize spiritual exercises ,some events for different groups of the Catholic Church and also as a venue for ecumenical activities.

We have bought land: 0,5 h – 100 m from the beach in Dzenish villageon the south caos of Issyk –Kul and we already ended general construction work.