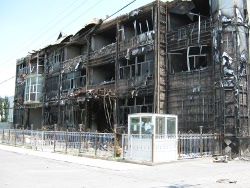 I am writing to let you know that, despite all the troubles, we are all well (Fr. Krzysztof, Brother Vova and I)! Our parishioners have all survived and our Chapel is still in one piece! This is the third series of violence since the Revolution. I was actually in Bishkek during the Revolution, but for the last month I’ve been on the building site in Issy-Kul (for the Spirituality Centre which will be used for the Summer Camps etc) So my information about the situation in Jalalabad is second hand. I’m in constant contact with Fr Krzysztof because, fortunately, our presbytery land line is still working. Since there was no gas or electricity, the internet and mobile phone have not been working, so we were very lucky to have this mode of communication.

Things have settled down a little in Osh and Jalalbad and it’s quieter.. It’s still difficult to measure the losses. Many Uzbek houses in Jalalbad were burned down, and also public buildings. In the centre of Osh a huge number of buildings have been destroyed. The official figures for the loss of lives is 200, but this figure is inaccurate, because of the difficulty of ascertaining facts amidst the anarchy in the south. The police and army have often been powerless or passive, or have sometimes even sided with the Kyrgyz. In Osh, both the Kyrgyz and the Uzbeks attacked each other, but in Jalalabad our view is that the Kyrgyz were the main perpetrators of the violence.

An estimated 100 000 Uzbeks have fled to Uzbeksitan, including a family from our parish. Some villages have been burned to the ground. There were gangs of 17/18 year old Kyrgyz youths roaming around the city nonchalantly with guns, just slung around their necks like cameras. After the uprising there were many raids and burnings.

In our presbytery we sheltered both Uzbek and Kyrgyz people. In the north of Kyrgyzstan it’s fairly calm. On the building site there are Kyrgyz, Uzbeks, Russians and 10 Slovenian volunteer builders. At the moment it’s difficult to foresee what might happen, but we have to remember that a lot of blood has been spilt and many seeds of hatred have been sown. We can only fight this battle with God’s help. A huge problem is the lack of moral values amidst the young people.

I am in Jalalabad at the moment – healthy and in one piece!

The fighting in the south of Kyrgyzstan has been going on since the middle of last week. It started in Osh and then turned in to an ethnic conflict between the Kyrgyz and the Uzbeks. In Jalalabad the fighting started on Saturday 12th Juni after some Kyrgyz youth took over 2 tanks and weapons from the army who were guarding the airport. By Sunday the gangs had increased in size and a 3000 strong gang entered Jalalabad. Fighting started to take place at the end of our road. Thanks to the strong opposition from the Uzbeks, the aggressors moved to the centre of town. We had to shelter a couple of families from our Parish together with their small children( Kyrygz, Uzbek and Russian). All the shops, hotels and restaurants which belong to the Uzbeks have been burned down in the city; also houses near the main street. The shooting calmed down this morning, and the remaining Uzbeks created barricades from fallen trees and stones to protect the roads into the Uzbek suburbs.

At least 100 000 people escaped to Uzbekistan within a few days from the southern area which was affected by the fighting. Now fear rules, because criminal gangs are operating everywhere and are very active. The government has imposed martial law. The only traffic on the road was Kyrgyz. There is a lack of food, although today we managed to buy some bread after queuing for a long time. The electricity is back on , but no gas yet. From our handful of parishioners, both in Jalalabad and in Osh, fortunately no-one (Kyrgyz or Uzbek) has suffered physically. As soon as the telephones worked we called them all the parishioners to check that they were well. They counted 50 mortalities at the hospital, but many casualties were taken from the streets without counting them. There are hundreds of injured people in an overcrowded hospital.

In Osh, there may even be up to 1000 dead, but the figures are all inaccurate. 100s of injured people are in the hospital. I’m in Jalalabad with Brother Vova, and today we’ve managed to buy (from the undamaged Kyrgyz shops) oil, flour and potatoes. We have started to provide aid to the needy. Tomorrow we want to coordinate our meagre offerings with the town people. And we hope that a representative of Caritas will be arriving soon (he is in Islamabad at the moment) We will get some aid from Germany, we’re hoping it will be on a larger scale. From the start of the conflicts in Jalalabad (and this was by far the worst of the three waves) many friends remember us and we thank you for your emails and conversations and also all those people who are praying for us. Brother Damian is in the north of Kyrgyzstan at the moment, carrying on with the Issy-Kul project (building the Spirituality Centre) . At the moment there are some Slovenian volunteers helping him with the building work. We probably won’t be able to go to the Jesuit meeting in Novosibirisk, because we doubt we can travel at the moment, I don’t have a visa at the moment and I would have to travel to Bishkek to the Russian Consulate. I really do need to stay here with our parishioners.

The immediate needs for funds will be to provide basic aid items such as food, baby food, toiletries, medical supplies & bandages for the wounded in hospital.

Longer term we wish to continue with our focus on encouraging the young people to participate in the church through summer camps and other youth activities.