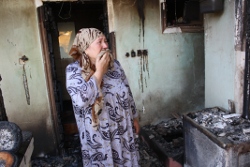 When I go and visit the Uzbeks (whose homes were burned down and who lost family members) I always introduce myself as follows : I’m Brother Damian, I work for the Catholic Church. We obtain our financial help from Europe, from people who heard about your tragedy. In one home the widow, whose husband was shot, interrupted me and said “I’ve met you before, I work for the Home for the disabled”. Since they cover their heads with scarves, it took me a while to recognise her. Walking around from one burned out home to another and having had contact with poverty for many years, you start to withdraw emotionally and only when you meet a familiar person who has met with tragedy, does your heart recognise the scale of the suffering that people are living through.

The other thing that impressed me was that there were 1000s of SOS signs written on the streets of Osh. The S was written in reverse, because the Uzbeks don’t know the Roman Alphabet. They believed that if they wrote SOS some helicopters would come and evacuate them.

The hatred and tragedy touched everyone across all social strata & income bracket. The attackers did not differentiate between anyone ; invalids, widows or children. In one village a woman with six children rushed out to protect her small shop. The bandits shot her, then they raided the shop and torched it to the ground. The kids were left with just the clothes they were wearing. Whilst I was visiting them some representatives from the bank were there informing them that they could no longer have the loan that they had requested because their house was burned down. We gave them some aid in terms of money , clothing, food and mattresses for the kids to sleep on. This type of raid by bandits was typical of those happening everywhere. They saw an opportunity for gains and so took it.

Our possibilities of helping are limited, but whatever we received we donated. The most beautiful work was carried out by the the Sisters of Charity, together with Fr Krzsysztof, our parish priest. They visited over 1100 familes during the week and gave assistance to over 5500 people. It wasn’t so much the aid that was important, but the fact that someone had time for the people. They felt that someone remembers them and that God cares for them in this way. Surprisingly, I noticed that most of the people who were touched by tragedy are not filled with thoughts of revenge. ….. The Uzbeks who were often a proud people who looked down on others, now have to realise they need help, that they are weak, that the high walls did not protect them and at the moment God is their only hope.

What were the causes of such a bloody conflict? Two nations living for years beside each other, however always harbouring some grudges, to this was added the total failure of government structures after the April revolution, including the police and army. Of course, you needed some agitators, who managed to create arguments between the two groups and to start a spark which created a fire. But if you look deeper, you can see clearly that the real cause is a total lack of morals and corruption amongst the ruling power, lack of morality amongst the young.

After the war one of our parishioners was mugged and died. A couple of days later a neighbour hit another parishioner with a rock because he was collecting nuts from his tree and some kids took our car to pieces. Violence and immorality are long term aftermath of ethnical conflicts.

What else can we do? I think that the most important thing we can do is to bring the Good news about God’s love and forgiveness. The upbringing of young people is so important. Despite the difficult situation in our country, we managed to organise several camps for children; for disabled children, widows & kids . We were able to do this work because of the newly build Spirituality and Rehabilitation centre at the shores of Lake Issy Kul. We still have some work to complete on this centre once we obtain more funds…