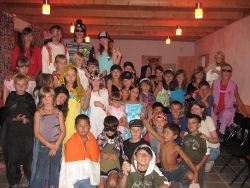 This summer was full of different events for Catholic Church in Kyrgyzstan and especially for us in Dzalalabad. There were 4 summer camps this year: two for small children, one for older and one for youth. Such camps are very important for us, because they are giving us a great chance to do pastoral work with children. Most of the children during the year are living in the villages, which are visited by a priest once every two weeks. There are a few children in our community and it makes it especially difficult for the youth: they have no believing friends.

This camps were prepared with help of Fr. Jerzy Jendrzejwski (secular priest from Poland) and two Franciscan Sister native from Kazachstan (s. Davida and s. Joanna). Two camps for little children were 3 days long about 40 children aged 5-9 took part. Children were staying in social center “Pro Homine” in Bishkek (country capital), which is run by the Sisters. Our children were taking part in a trip to the mountains, where Holy Mass was celebrated, they also visited Aquapark. Nuns run religion classes for them and children learnt new songs. For almost all of the children it was the first time in a summer camp and in Bishkek.

In the camp organized on the beach of the Toctogul lake located in the Tienshan high mountains 300 km away from Bishkek took part 30 kids aged 9 -14. They were predominately from villages around Bishkek (Sokoluk, Serafimovka, Tuz, Stancya Ivanovka, Ivanovka, Oktyabrskoye), and from Bishkek and Dzalalabad. Children were swimming in the lake (mornings and afternoons). There were religion classes twice a day organized by Sister on the theme “Holy Mass”. They went for a trip to the mountains, took part in different sport competition, everyday attended Holy Mass and community prayer. There were cinema screenings in the evenings , discos or camp-fires. Bishop Nikolaus Messmer paid us a visit one of the dazs. Camp was 10 days long. Few of our youth helped us as the leaders.

30 youth Catholics spent 10 days in the high mountains close to Issyk-Kul sea. First days they were living in the yourta (kyrgyz traditional tent), but because of the big rains we had to move to the old meteorology-station. We had a few trips in to the high mountains. The youth were preparing fire and food themselves. They were aged from 15 till 23. During conferences we were talking about subject: “love-sex-couple”. Every day there was a camp-fire or funny evening with songs and community prayer. One Polish Jesuit was a spiritual Father but also he was teaching climbing. We spent last two days on the beach of Issyk-Kul. This summer camp was prepared thanks to financial support from Vatican.

In July our parish of blessed Mother Teresa from Calcutta was visited by two doctors from Austria: Dr. Tomas and Getraud Weggemann – specialist of handicapped children. This visit was organized by Fr. Herwig Buechele SJ from Insbruck. They examined about 60 children during 3 days, most of them with Cerebral Palsy or other heavy mental or physical illness. They have examined 30 small children in the city main hospital. They visited orphanage where are living 120 children, most of them deeply mentally and physical handicapped. We bought a washing machine for this house. They wanted to have new big washing machine, because their soviet machine was very old, and almost not working. One women working there is taking care of about 25 children who spend all their lives in bed, she has a salary of 20 Euro (this is enough to buy 70 bread)!!! If this old washing machine would stop working this would be true tragedy for this women, because a new one costs 4000 Euro and Ministry of social affairs, said that they have no money for such expenses. When it was possible visiting doctors gave medicine for the sick. We want to continue this activity, but we would need guest rooms and cabinet for doctors and place for chemist.

Last month we bought a shop in the neighbor house. The entrance to this place is from one of the biggest streets in the Dzalalabad, so we want establish there a chapel, which til today is located in our Jesuit community house. We have started reconstruction of this room.