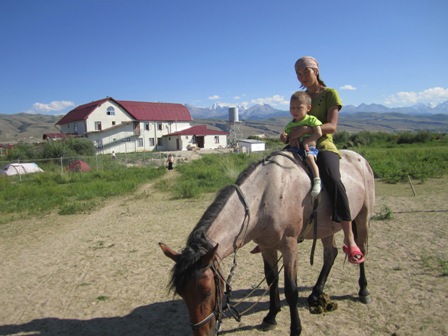 This summer for the second time the Children’s Center located in the village on the southern shore of Issyk Kul welcomed children and young people from Kyrgyzstan and Uzbekistan.

The center can accommodate up to 90 people, it is located in a quiet and picturesque site just 100 meters from the lake. Lake Issyk-Kul is one of the largest and deepest (702 m) lakes in the world, it spreads at an altitude of 1600 m AMSL and it doesn�??t freeze in the winter. The facility is placed near forests, mountains and glaciers of the Tien-Shan. This arrangement allows the guests of the Centre not only to relax on the beach, but also hike or bathe in the hot springs.

This year the Centre hosted more than 700 children, youth and adults. This year there were two camps organized for children from different parishes of Kyrgyzstan and one camp for young people form Kyrgyzstan and Uzbekistan connected with the Catholic Church.

Camps were supervised by the founder of the Center �?? br. Damian Wojciechowski �?? SJ, while rev. Jerzy Jendrzejewski, fr. Remigiusz Kalski SJ and s. Bogumila from the Congregation of the School Sisters of Saint Francis, where securing the religious aspects of the camps. The theme of the children’s camps was: “7 capital sins, 3 theological virtues and 4 cardinal virtues”, while the theme for the youth camps was �??Following the footsteps of St. Luke�?�. During the camps, all participants had to cook, wash dishes and do the cleaning. Every day began with morning exercise, after breakfast we organized meeting considering retreats and then we usually went to the beach. At midday we celebrated Holy Mass, after lunch we played sports by the lake and in the evening�??s we had a movie night, a disco, a carnival or a bonfire.

During the camps we also organized excursions to the mountains, to the hot springs or to the town of Karakol, where children went to the zoo, the Orthodox Church and the Museum of the Przewalski. During the three months of summer vacation, in addition to Catholic camps at the Center we also hosted and rehabilitated more than 20 groups of orphans, disabled children and children from poor families (including three camps for children from the area of Jengish). There was also a camp for the Music School in Bishkek, as well as the camp for Polish society “Odrodzenie”.

Two camps were organized for 70 students from the Jalalabad State University. Although they were all Muslims, this has not stopped them from spending time with Catholic students from Europe. During the camps we had common bonfires, discos, competitions and English lessons. Students also spent three days in the mountains where we lived in tents. This camp was their first opportunity for them to get closer to Christianity. After the camp, one of the students wrote “it was a great time during which we felt love and friendship”.

30 volunteers from Kyrgyzstan, Poland, Switzerland, England, Belgium, Slovenia, Ukraine and Russia, were helping us during the camps. That includes s. Seraphim and s. Maximiliana from the Congregation of the School Sisters of Saint Francis and br. Marian – Franciscan from Fergana (Uzbekistan), br. Vladimir Pashkov, scholastic Toon Cavens from Belgium and Ms. Ashleigh Callow from Jesuit Mission in London.Dr. Thomas Weggemann �?? specialist in children�??s�?? disabilities together with the therapists: Ursula Dietz i Heidi Praxmarer carried out consultations and therapy for the disabled children. Along with them came fr. Herwig B??chele SJ from Austria, who organized their trip and had helped us a lot during with the construction of the Center, recently also thanks to his efforts we received a new car from Austria to our community in Jalalabad. Dr. Weggemann and the therapists from Austria came also to Jalalabad and Osh, where they�??ve work with children with disabilities in organization “Merim Bulak” (“The Fountain of Mercy”), which was established with our support.

The camp participants partly paid for their stay themselves and partly received help from the Jesuits in Germany and Switzerland, as well as the charity fund “Renovabis.” After all the camps have finished, in early September, fr. Eliot Mariecki OFM conducted retreats at the Center for the Congregation of the School Sisters of Saint Francis of Kazakhstan and Kyrgyzstan.

All this work wouldn�??t be possible if it wasn�??t for the help of two Jesuits from Poland – Adam Malinowski and Adam Tomaszewski, who substituted for fr. Remigiusz in the Parish in Jalalabad.

On the second of September our Parish has welcomed two volunteers from Poland who are teaching English in Jalalabad and Osh. They will be staying with us for 4 months, and their stay is sponsored by European Commission.